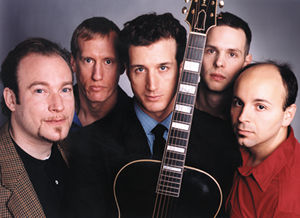 I grew up devoted to a wide range of out-of-date, out-of-place music, but everything didn’t have to be 50 years old – the music of The Beatles, Hoagy Carmichael, Randy Newman, Cole Porter and The Band were as present in my house growing up as my cherished Bill Monroe and Ralph Stanley records. BROCK MUMFORD was my primary performing group at the dawn of the aughts, and the band I was writing my songs for. It was a crew of really good musicians who were grounded in older styles, but who sought to create an intelligent, acoustic, pop band of sorts – with improvisation, and accordion.

After a chance late night meeting on a subway platform in the late 1990’s, the accordionist Will Holshouser and I began getting together to play French musette and gypsy swing music, and our duo served as a jumping off point for a band. We regularly performed a mix of originals, hot instrumentals and obscure-ish pop songs (Scott Walker, Van Dyke Parks) at Brooklyn’s brand new Pete’s Candy Store, and were soon able to recruit my friend, the great trumpeter Jon-Erik Kellso to the fold. The band’s sound would often serve to make the novice listener ask, “What kind of music is this”? The honest answer was and is: It’s Jazz. But no one wants to hear an honest answer, and given some of what’s been enacted in jazz’s good name, that’s probably all for the best.

The remarkable Danton Boller regularly plays bass, and BROCK MUMFORD recordings have featured Rob Garcia, Quincy Davis, and Jim Whitney as well.  We have a couple of CDs out – our CD “Love Story” won a lot of great notices and is available all over, including here.

But of course, that’s only one tale of Brock.

©
Warning: Use of undefined constant Y - assumed 'Y' (this will throw an Error in a future version of PHP) in /nfs/c09/h02/mnt/128523/domains/mattmunisteri.com/html/wp-content/themes/muni/footer.php on line 10
2021 Matt Munisteri | site by Origin Web Design