Still Runnin’ Round In The Wilderness 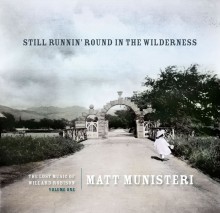 During the mid 1920’s Willard Robison was working as a pianist and arranger with many of the stars of the new jazz vanguard when he went into the studio and recorded a string of startling recordings which almost certainly made him the prototype for the American 20th century’s most abundant and everlasting artistic archetype: The singer/songwriter. Before the deluge – before there was Hoagy, or Johnny Mercer, or Randy Newman, or Mose Allison, or Brian Wilson, or Van Dyke Parks – Willard Robison wrote, orchestrated, conducted, and sang his own utterly unclassifiable music and lyrics in a series of pioneering and timeless recordings between 1924 and 1930. His songs told of odd rural loners, wild open landscapes, revival camp meetings, preachers, and the devil (always the devil) and employed a complex and surprising harmonic and melodic language which, while referencing the new jazz – along with classical, ragtime, blues, and even old time country music – emerged at once as a fully realized and completely original American voice. And yet his original recordings, beginning in the 1920’s, have never been commercially re-issued after the 78 RPM era – LPs and CDs have both passed this music by.

Lauded for his fiery guitar chops, literate humor, and “pre-war heart” (The New Yorker), the likewise unclassifiable ace guitarist, singer, and songwriter, Matt Munisteri has spent over a decade hunting down, transcribing, and performing these lost masterworks, refracting them through his own individual prism of 20th century American music. In the process he has not only brought these tunes to light, but has imbued them with an organic and riveting beauty in which jazz improvisation, folk traditions, and popular song co-mingle. With a crew of top NYC musicians he has re-imagined Robison’s songs, culled from their original recordings, as a body of work rightfully freed from the trappings of era or idiom.