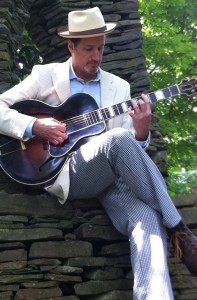 “Wicked. Jazz musicians aren’t supposed to write lyrics that good… Bands like this are why you move to New York.”
– THE VILLAGE VOICE

It’s a daunting task, this business of encapsulating Matt Munisteri’s musical self. As the sparkling guitarist on several chart-topping jazz CDs; a critically lauded songwriter and nimble lyricist; an urban banjo-warrior and a sometime session musician; a selfless and devoted sideman; a wry-yet-honest singer; an engaging and winning front-man; and an arranger whose ear-pulling re-inventions of well-traveled songs have contributed to Grammy winning CDs for artists such as Loudon Wainwright and Catherine Russell, Matt’s various dueling career paths might at first seem difficult to reconcile. Additionally you’d be hard-pressed to find another Brooklyn native who grew up playing bluegrass banjo since he was in the single digits; who has recorded with artists as divergent as consummate jazz balladeer “Little” Jimmy Scott and 1980’s avante-noise godfather Glenn Branca; who is regarded as a contemporary master of 1920’s and ’30’s jazz styles, and is an ardent student of American folk traditions, but counts among his regular creative cohorts several musicians associated with the New York Downtown music world. Yet ultimately Matt’s journey through 20th century American music yields a vision which feels intrinsically whole, with his own music always serving as one-of-a-kind reflection of a life immersed in all the far-flung variants of American Popular Song. Maybe it’s easier to say that whatever he’s currently up to, it will be a living reconciliation of rural and urban, long-gone and contemporary, individual experience and canonized scripture.

After leaving his post as the guitarist and principal songwriter for The Flying Neutrinos in the late ’90’s, Matt quietly self-released his debut CD “Love Story” in 2003. Word-of-mouth saw to it that it wound on several critic’s “Best Of” lists, and garnered the number two slot on Amazon’s Top Ten Jazz CDs of The Year. A formidable lyricist (“Jazz musicians aren’t supposed to be able to write lyrics that good” – The Village Voice) his literate songs have been compared to Randy Newman, Mose Allison and Bob Dorough. Matt has been featured on France’s ARTE television, profiled in Downbeat magazine, honored with Acoustic Guitar Magazine’s Editor’s Choice award, and been the subject of several broadcasts on NPR.

Despite a lack of formal musical schooling (and even less useful, possessing a degree in Religious Studies from Brown University) Matt has nonetheless found himself with a dreamy and demanding day job: A freewheeling and virtuosic guitarist, he currently gets to work with a wide variety of artists at the top of their game across the jazz and American roots music spectrum. Better still, he finds that these twin jobs as a sideman and a leader only serve to complement one another. “This way I’m constantly learning, with each part of my working life feeding and informing the other – it beats digging ditches.” When not working on his own projects his primary sideman gigs for the last few years have been playing with violinist Mark O’Connor’s Hot Swing; Steven Bernstein’s Millennial Territory Orchestra; and with the singer Catherine Russell, for whom he also currently serves as Music Director. He also recently lent a hand to his friend, guitarist Julian Lage, producing Julian’s acclaimed solo guitar debut “Worlds Fair” (2015).

Though an instrumentalist of prodigious technique, and a relentless improviser, Matt has always felt a primary connection to songs, to their forms and emotional landscapes, and his skills and originality as an accompanist have lead to calls to record with some of today’s most soulful and individual singers. These include Holly Cole, Madeline Peyroux, Liz Wright, “Little” Jimmy Scott, Geoff Muldaur, Sasha Dobson, and Kat Edmondson. Outside of the jazz world, Matt was a key player on Loudon Wainwright‘s 2010 Grammy-winning CD High Wide and Handsome – The Charlie Poole Project, to which he contributed arrangements, guitar, and 5-string banjo. He is credited on over 70 CDs, including recent releases by trombonist Wycliffe Gordon, and guitarist Howard Alden. In mainstream jazz contexts he has concertized with The Lincoln Center Jazz Orchestra, Kenny Davern; Andy Stein; Matt Glaser; Tim Kliphuis; Aaron Weinstein; Vince Giordano’s Nighthawks; Frank Vignola; Jon-Erik Kellso; Evan Christopher; Duke Heitger; Bob Wilbur; Bucky Pizzarelli; and Dick Hyman. With the moorings loosened he has enjoyed long and fruitful associations with like-minded free-ranging wanderers such as Rachelle Garniez, Jenny Scheinman, Gina Leishman, and Greg Cohen.  As one third of The Millennial Territory Orchestra‘s rhythm section (along with Ben Perowsky and Ben Allison) his versatility and electric guitar chops are regularly honed – especially when the group is augmented by guests such as Bernie Worrell, Vernon Reid.  In 2014 Matt joined drummer Herlin Riley and bassist Reginald Veal to form the rhythm section for “Viper’s Drag”, the first CD by New Orleans’ piano giant Henry Butler, Steven Bernstein and The Hot 9 (Impulse).

Matt’s CD Still Runnin’ Round In The Wilderness, (2012) is the first volume of two planned CDs to explore the “lost” compositions of the under-recognized, but truly prototypical, American singer-songwriter Willard Robison.  Matt is partial to big ideas and prefers projects with challenges and substance, and tackling Robison’s music met all of these criteria. “I felt this was music that was actually important, and has real meaning – both in terms of its content and its obscurity. This is far from being another ‘songbook’ project’ for me”. The disc’s creation was filled with many eureka moments of the sort inherent in what he terms “musical archaeology”: There were the personal ones – discovering of an honest and meaningful way into this largely unknown, challenging, and beautiful music; and the purely logistical ones – as these songs have never been commercially re-issued on LP or CD, he needed to first find his source materials on original 78 records from the 1920’s and ’30’s.  The development of these over-looked gems into something personal and expansive was a labor of love which wound up stretching over several years. Matt has been honored to perform his re-imaginings in concerts at MassMoCA, Celebrate Brooklyn, RoCA, and at a 2012 SXSW official showcase.

As a collaborator, Matt is a co-leader on “Hell Among the Hedgehogs”, (2012) a smoking hot twin guitar CD with The Hot Club of Cowtown’s Whit Smith, and he’s one third of Musette Explosion, a decade-old band with accordionist Will Holshouser and tuba player Marcus Rojas which just released its debut CD in 2014. If this writer had to pick just one more project of Matt’s to see come to fruition in 2016 (other than Willard Vol II) it would be to finally record with his still as-yet-unamed Italo-Carribbean band…but that’s another story, which would necessitate this bio being even longer. So here we pause.