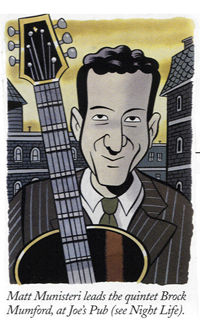 “Wicked. Jazz musicians aren’t supposed to write lyrics that good…Their music is their own, neither jazz, nor rock, nor cabaret, but at the same time all of them. I’ve never heard anything like it; catch them now, while they’re still playing basements. Bands like this are why you move to New York”.
– The Village Voice

“Songwriter-guitarist Matt Munisteri has put together a relaxed, swinging combo that puts content before nostalgia… The band which features accordionist Will Holshouser and trumpeter Jon-Erik Kellso is choice”
– Time Out New York

“The originals by Munisteri are not throwaways, but have real meat on their bones. Sometimes funny, sometimes melancholy, but always hip…sounds like something you’d expect from Dave Frishberg”
– The All Music Guide

“When Hollywood finally gets around to making that pitch-perfect romantic comedy – you know, something classy yet silly, ironic yet earnest, urbane yet folksy – they won’t have to worry about the pitch-perfect soundtrack.”
– The Valley Advocate

“Glorious…This is fun, fun music that arrives as drifting fairy dust, but proves itself through peerless instrumental work”
– The Hampshire Gazette

“What an engaging set of songs, and in its somewhat retro way, a brash undertaking. At a time when record sales are dominated by bad rap/hip-hop — crude bellicose karaoke performed by talentless trolls — this Love Story by Matt Munisteri and Brock Mumford is a ninety degree against the grain delight”.
– All About Jazz

“A really different gloss on the notion of “alternative” music…In addition to his smart, varied, and well-crafted originals, Munisteri does a gripping guitar-and-vocal rendition of Hoagy Carmichael’s “Lazy Bones,” as well as what might be the best Bob Dylan cover ever.”
– The All Music Guide

“Matt Munisteri is one of those singer-songwriters born out of time…and it comes out sounding like the Band’s second album as written by Dave Frishberg. Will appeal to fans of everyone from John Pizzarelli to Tom Waits”
– The Rogovoy Report

“Songs of the simpler, almost sleepy, romantic era of the early twentieth century”
– The Hampshire Gazette

“Daunting mastery…one of New York’s best vintage-guitar stylists, without a doubt”
– All About Jazz

©
Warning: Use of undefined constant Y - assumed 'Y' (this will throw an Error in a future version of PHP) in /nfs/c09/h02/mnt/128523/domains/mattmunisteri.com/html/wp-content/themes/muni/footer.php on line 10
2021 Matt Munisteri | site by Origin Web Design